This quickstart will guide you through the basics of Unloc's Integrator API: How to authenticate and get an Access Token, how to list and create Lock Holders, get a specific Lock, get and create Keys and Roles for it.

The guide assumes you have a basic understanding of HTTP, REST and OAuth2, and that you already have an Integrator account and access to Unloc's Sandbox Environment.

Before diving in, let's go over some important concepts to keep in mind in order to better understand this quickstart guide.

The below diagram shows the relation between our different models: 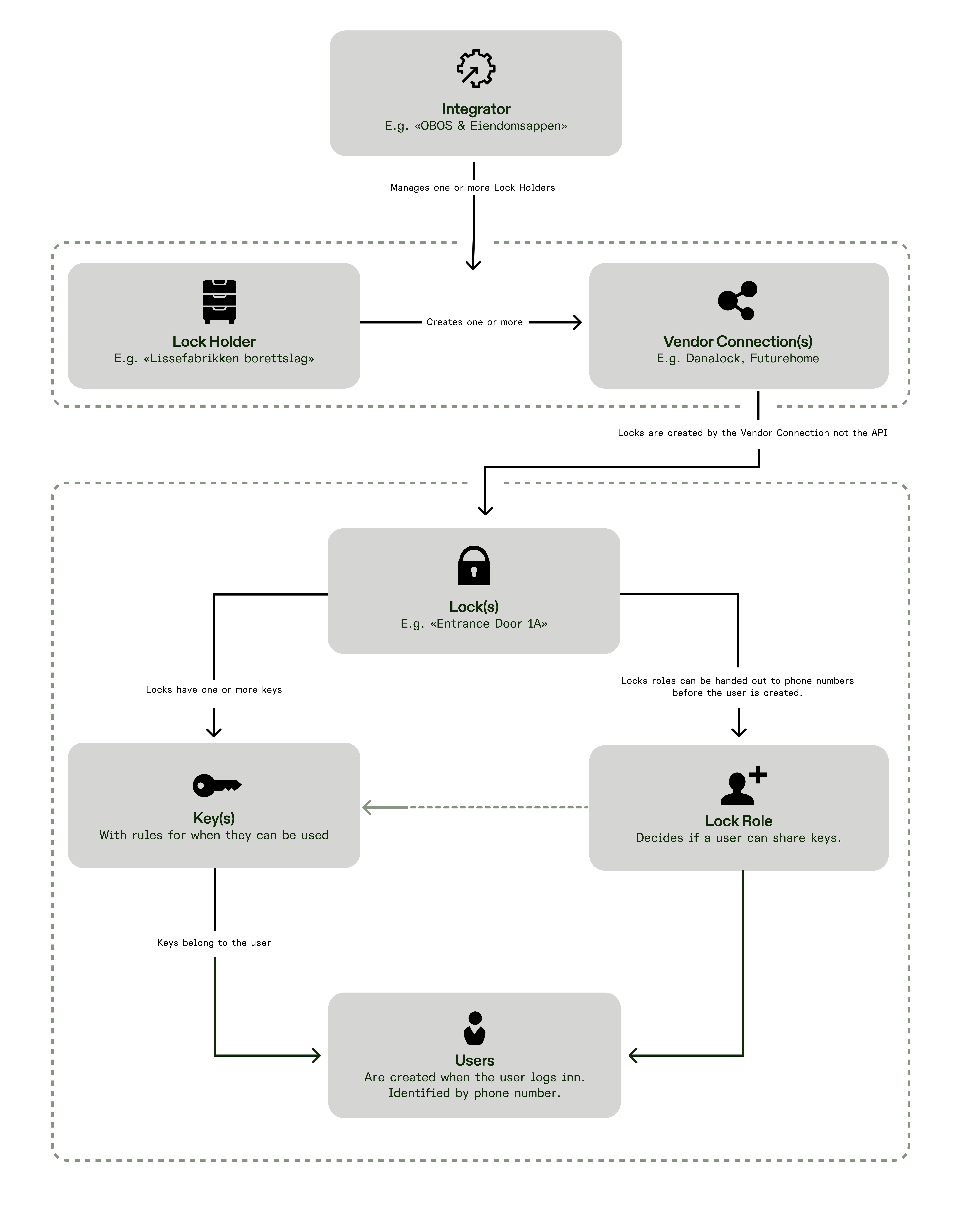 That's you! An integrator represents the entity or systems that manage Keys, Roles, and Locks, such as a property management system.

A Lock Holder represents the entity that owns or contains Locks, such as a building, housing cooperative, or storage facility.

Keep in mind that a Lock Holder can be managed by any number of Integrators, so you can create multiple systems that will be able to access them.

In the picture above you can see three different Lock Holders:

A vendor connection is the connection between a Lock Holder and a Lock vendor (such as Danalock, Master Lock or Futurehome, for instance), and is the only way to add Locks to a Lock Holder.

The Lock model is the representation of a physical Lock, Keys and Roles will be directly linked to a specific Lock.

Each Lock belongs to a Lock Holder, and may only be added via a Vendor Connection.

A Key represents a user's ability to open and close a Lock.

Keys may be permanent (until explicitly revoked) or be active during a certain period only, which means they may be restricted to only work during specific time frames during a day.

A Key is sent to and associated with a Mobile Phone number and does not require the user to exist at the time of creation. This makes it easier to distribute Keys as users do not need to have the Unloc app installed on their mobile devices beforehand.

A role represents a user's ability to give Keys to others for a given Lock via the Unloc App.
This role does not give the ability to open a Lock, although a user may give a Key to themselves to achieve this.

A role is given to a Mobile Phone Number, and does not require the user to have created an account via the Unloc App at the time of creation.

Updated about 1 month ago

The next step will be to Authenticate against the Integrator API

Did this page help you?